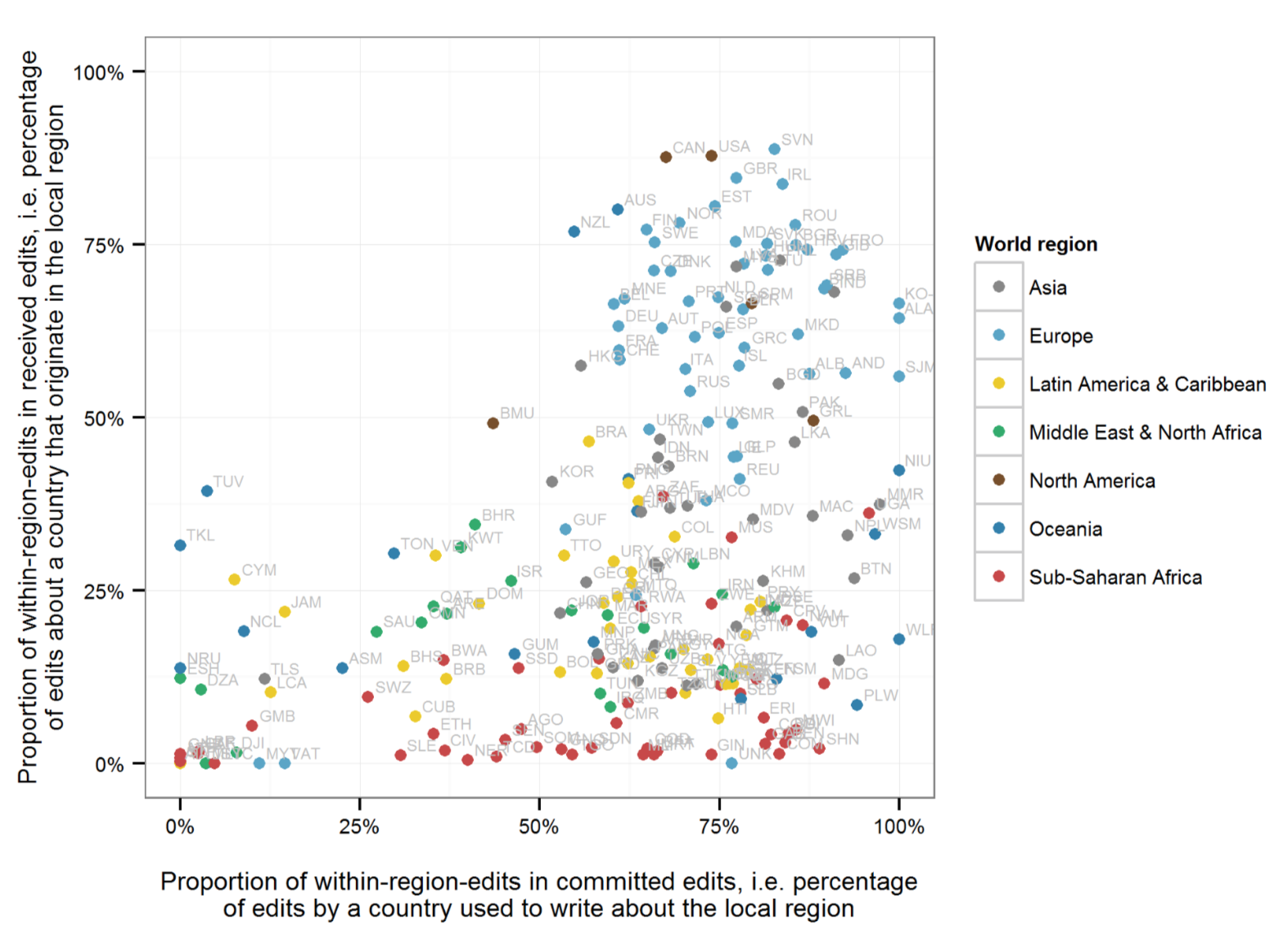 The previous two posts about the geography of contributions to Wikipedia showed both the different types of local engagement that different regions have, and the primary reason that Sub-Saharan Africa, in particular, has such a low proportion of locally created content.

However, while the graphic in our previous post (also included above) gives a good overview of core and peripheral world regions in terms of their broad patterns of editing, it lumps together countries that may find themselves on quite different trajectories.

The visualisation above thus portrays essentially the same data as the original regional-level one, but resolves world regions into their constitutive countries while still looking at within-region-edits. The original graphic thus betrayed a substantial amount of variability at the national level. Individual countries are characterised by significantly different ways in which they are defined by people in far-away places, and the ways that editors in those countries contribute to far-away places.
Countries within Sub-Saharan Africa, Latin America & the Caribbean and the Middle East & North Africa can vary substantially, primarily regarding their inside/outside-focus of editing (horizontal axis). For instance, editors in some countries in Sub- Saharan Africa (e.g. Uganda, Madagascar, Namibia, Malawi) are much more likely to edit about regional topics than editors from other countries in the region (e.g. Gambia and Swaziland). Conversely, North America and Europe show a more coherent pattern. Most European countries, for instance, have a majority of content about them created in Europe and have their editors make a majority of their geographic edits about Europe.
With regard to Sub-Saharan Africa it is also important to note that most countries receive a very small fraction of edits from within the region. The regional graph at the top of this post shows that only 16% of content about Sub-Saharan Africa is from the region, but even this number is inflated by relatively high numbers for South Africa, Uganda, Mauritius, Rwanda and Zimbabwe. In other words Sub-Saharan Africa’s figures would be even lower without the outlier-effects of those five countries.

Note that this work comes from the following report (the relevant parts of which were written with the help of Ralph Straumann and Bernie Hogan):