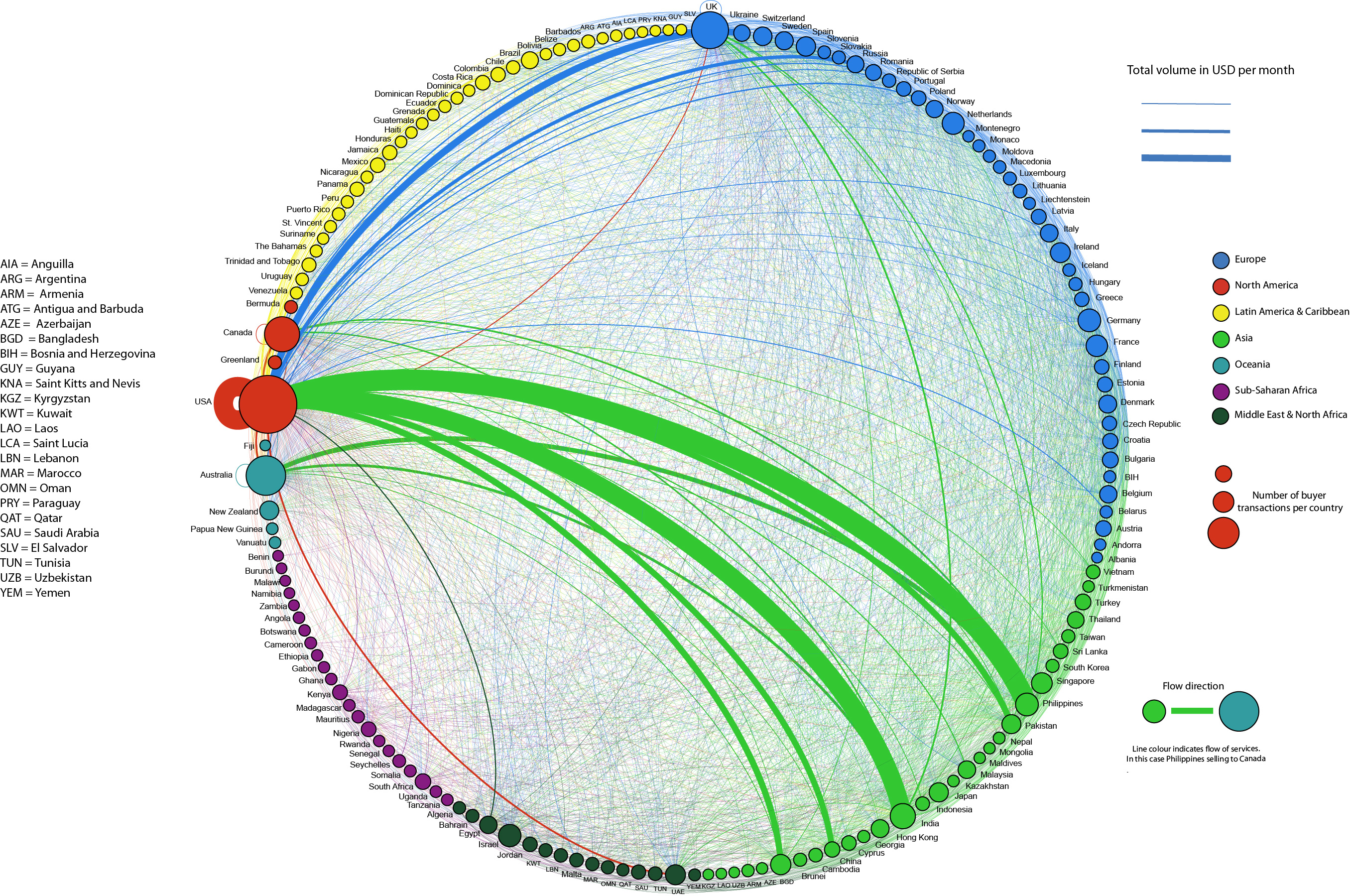 With the rise of online work platforms like Odesk, Elance, and Freelancer, a lot of work can, in theory, be done from anywhere on the planet. This has led to a lot of hopes that digital work can be used as a tool of development: bringing jobs (and income) to parts of the world where jobs are currently scarce (something that I’m studying as part of a multi-year project with my colleagues Vili Lehdonvirta, Isis Hjorth, and Helena Barnard).

As a first step, we obtained transaction data from one of the world’s largest online work platforms. ODesk.com is the world’s largest marketplace for digitally deliverable IT and service work. It has a million registered employers, 4.5 million registered workers, and an annual volume of trade of 500 million dollars. We obtained all anonymised transaction data from March 2013 (over 60,000 completed transactions) in order to map the networks and geographies of online work. This short post intends to briefly outline some of the patterns that we see (and will be analytically exploring in more detail with further quantitive and qualitative research).

The first map, below, illustrates where much of this trade is occurring. Here you see a map of the number of buyers in each country – and we can see that there are distinct geographies of the trade in online labour. The countries that are home to the most purchases (which are the countries shaded in the darkest blue colour) are almost all wealthy countries. The only countries in the top-20 list of countries from which most purchases are made that are not considered to be high-income countries are Malaysia (ranked 15th) and India (ranked 19th).

Number of buyers per country

The geography of sales (in the map below) reveals a very different pattern. Even though most demand comes from the Global North, much of the work actually performed is carried out in low-income countries. India and the Philippines, in particular, perform much of the work on the platform. The pattern, however, is a more complicated one than the geography of buyers. A significant amount of work remains carried out in wealthy countries such as the United States, Canada, and the United Kingdom. The below map also illustrates that there is a broad geography of supply. The broader picture, therefore, is one whereby demand is relatively geographically concentrated, but supply is relatively geographically diffuse and workers from low- and high-income countries compete in the same contexts.

Number of Sellers per Country

The relationships between supply and demand are further illustrated in the below map. It distinguishes between countries with a positive balance of payment (i.e. countries in which more work is sold than bought) and countries with a negative balance of payment (countries in which more work is bought than is sold). The figure more clearly delineates the geography of supply and demand: with much of the world’s demand coming from only a few places in the Global North.

Most African countries with a negative balance of payment all have very low levels of both supply and demand: something illustrated in more detail in the network below (and something we’ll be addressing in future visualisations).

It is also worth mentioning that the market is highly international: 89% of the trade measured by value happened between a client and a contractor who are in different countries. The network therefore attempts to illustrate the entirety of those international flows in one graph. It depicts countries as nodes (i.e. circles) and volumes of transactions between buyers and sellers in those countries as edges (i.e. the lines connecting countries). Country nodes are shaded according to the world region that they are in and sized according to the number of buyer transactions originating in them. Edges are coloured according to the flow of services: with the line shaded as the colour of the originating/selling region. Edges are also weighted according to the total volume of trade.

The Geographic Network of Sales

We see not just a complex many-to-many relationship of international trade, but also the large role that a few geographic relationships take (in particular, India and the Philippines selling to the United States). In other words, whilst (for many types of services) people and firms can buy and sell from almost anywhere (and indeed there are examples of most kinds of connection), in practice, some geographical relationships dominate.

Our project aims to address many of the questions that these mappings raise, including why we see such distinct geographic agglomerations of digital work that, in theory, can be done from anywhere; and why wages (even for the same job types) remain much lower than the average in Asia and Africa (more on this in our next post). In the meantime, we would welcome comments and reflections on these preliminary results.

(Elance-oDesk Inc. supported this work with their data; our project is funded by the IDRC; also thanks to Stefano De Sabbata, Claudio Calvino, and Sanna Ojanpera for their help with this work)