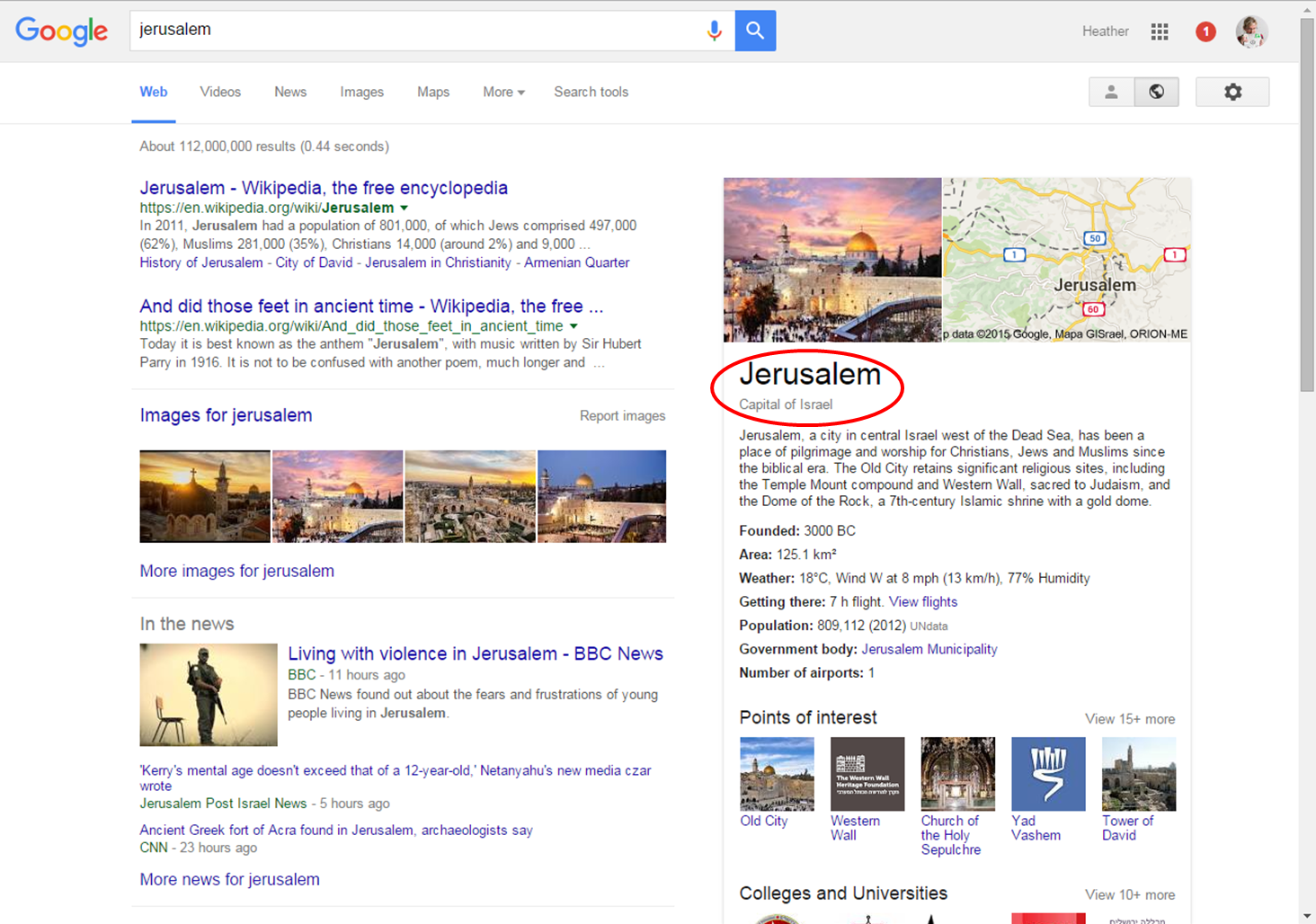 If you Google the city ‘Jerusalem’ today, you will most likely see something like the screenshot above. In addition to Google’s organic search results presented as a list of 112 million possible sites that may meet my information seeking needs, Google presents me with an infobox or fact box on the right hand side of the page. The fact box is titled ‘Jerusalem’ followed by the statement ‘Capital of Israel’. The fact box contains a paragraph about the city, followed by a list of facts about the area size and population of Jerusalem that is cited to UNData.

The political status of Jerusalem has been widely debated in the media and by multiple stakeholder groups. This is because the city is claimed as capital by both the State of Israel and the State of Palestine. The city’s borders and governance have changed significantly over the years, most recently after the 1967 (Six Day) war between Israel and the neighbouring states of Egypt, Jordan and Syria when Israel annexed East Jerusalem from Jordan. Despite vehement disagreements by governments in the region, however, there is no widespread international recognition for Jerusalem (as composed of both East and West parts) as the capital of either Israel or Palestine.

In order to understand the answer to this question, Mark Graham and I investigated the primary sources that Google is deriving these statements from. According to Google, in the blog post that launched the Google Knowledge Graph as the engine driving the results presented in these fact boxes, the company draws from ‘public sources such as Freebase, Wikipedia and the CIA World Factbook’ and augmented by results ‘based on what people search for, and what we (Google) find out on the web’.

In our new paper, we trace Google’s representations of Jerusalem in the Knowledge Graph to its origins in Wikipedia, in particular, focusing on Google’s relationship with Wikipedia in a new project called Wikidata that extracts facts from Wikipedia into a linked data or semantic web format. As a result of this extraction of data from one context to the other, we argue, is having four core effects: data becomes a) less nuanced, b) its provenance (or source) is obscured, c) the agency of users to contest information is diminished and d) the use of personalised filters mean that users cannot see how the information presented to them is different from what is being presented to others.

Because the dominant discourses surrounding the move towards a more semantic web frame these changes as inherently technical rather than political, we conclude that there needs to be a renewed debate about the politics encoded in and performed through geographic linked databases.

Our aim in writing this paper is not to point a finger specifically at either Google or Wikidata. All major search engines are doing something similar to the Knowledge Graph in displaying facts rather than query results to users, and all major information platforms are (rightly) thinking about how they can better share information and knowledge, and enable its use by a variety of other creators down the line.

We know that the engineers and developers, volunteers and passionate technologists are often trying to do their best in difficult circumstances. But there needs to better attempts by people working on these platforms to explain how decisions are made about what is represented. These may just look like unimportant lines of code in some system somewhere, but they have a very real impact on the identities and futures of people who are often far removed from the conversations happening among engineers.

I am a University Academic Fellow at the University of Leeds in the School of Media and Communication where I study and teach about power, representation, governance and politics online.