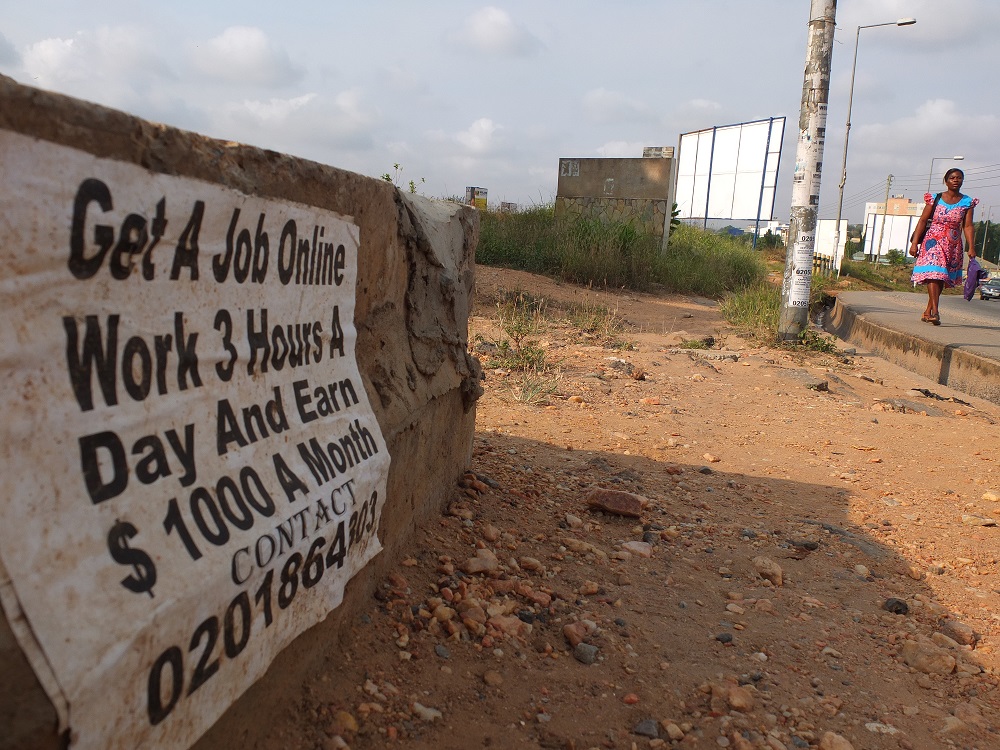 We live in a world in which it is increasingly possible to use online labour markets to outsource work directly to any corner of the planet. Millions of new jobs are thus available for workers in some of the poorest parts of the planet. But the fact that we now have millions of people around the world all competing for the same jobs threatens to undermine a range of working standards.

This situation in which we find ourselves is largely possible because of the rapid spread of the internet to relatively low-income populations. Ten years ago, less than 20% of the world’s population was connected to the internet; and next year we’ll probably have more connected people in the world than disconnected ones. Many of these new internet users live in parts of the world in which well-paying jobs (or indeed any kinds of paying jobs) are hard to come by.

So it makes sense that so many people turn to online work marketplaces do to tasks like virtual assistance, translations, transcriptions, computer programming, graphic design, writing, and other such intellectual and digital forms of work. This system is often organised as a cut-throat bidding process: clients lists jobs on those marketplaces, and workers then try to outbid each other for contacts by offering a lower price or better service.

What it notable about this labour system is that it potentially cuts out a lot of intermediaries, or ‘middle-men’, in chains of work. Think, for instance, of a small business in Manchester that needs a document translated. This could have once been done by outsourcing that task to a local firm, who would outsource to a large business process outsourcing firm, who, in turn, would outsource it to a smaller firm based in Manila, who would then employ a translator to do the work. Now this task can simply be done by connecting the buyer in Manchester with the worker in Manila through an online marketplace.

In theory, this can yield benefits for both the buyer and seller of work, as far less profit needs to now be captured by a chain of intermediaries. But, in many instances, what actually happens is that new intermediaries arise in these digital marketplaces: taking relatively high rates from clients and paying relatively low wages to workers.

This seems to happen for two main reasons. The first is that in traditional workplaces, workers are grouped together under one roof, making it straightforward for the employer to observe the work. However, when work is organised instead through digital platforms, the employer and worker enter into a non-proximate relationship, making monitoring and control difficult.

Ranking and reputation scores, therefore, play a massive role in ensuring quality. If you have a good feedback score as a worker, you’ll get a lot of work. Conversely, if you have not yet managed to amass positive feedback, it becomes extremely challenging to find work. There are a lot of workers on platforms like Upwork.com and Freelancer.com who spend years trying to get their first job. Such workers will accept extremely low paying jobs and sometimes undertake speculative and free labour for the promise of a high rating. What then happens at the same time is that some of the people who do have good scores bid for jobs and then re-assign them to workers with lower scores (usually for a much lower wage).

Second, and perhaps more importantly, online work platforms – by design – treat labour as a commodity to be bought and sold. Work is often packaged up into bite-sized tasks, and workers are treated as replaceable. If labour is a commodity to be easily bought and sold, then the very existence of millions of people in online marketplaces who are desperate for work and are willing to work for low wages will create intermediaries. It is irrational to do tasks yourself as a worker who has a decent score when you could outsource them for a fraction of the cost you would receive to deliver them.

This means that practices like paying minimum wages and living wages become less meaningful – when tasks can be commoditized and outsourced. The very existence of a broad base of people willing to work for subsistence-level wages can exert a gravitational downwards pull on any work towards them in a supply chain.

As millions more potential digital workers join the global network every year, how then should we avoid a situation in which an oversupply of labour can result in an unfairly low market price for work?

We’ll probably need to begin by reframing the very work that goes on in these platforms. If work is a commodity to be bought and sold, and workers are all individual entrepreneurs, it is rational to use these platforms to exploit co-workers. Many workers have internalized these sorts of internalised visions of individuality, competition and predatory behavior. But if people see themselves as workers rather than entrepreneurs, then we have more possibilities for workers to collaborate, cooperate, and organise in an attempt to secure better working conditions for all involved in this disparate digital workforce.

There is a range of ways in which this could be done. One place we could learn from is agricultural production networks. For instance, as the poverty of workers began to impact yields and the supply and availability of coffee, the creation of cooperatives and other benevolent intermediaries was actually encouraged by multinational buyers.

We could therefore envision more digital platform cooperatives that would ensure that workers all have a stake in the platforms that mediate their work and receive fair compensation for their time. Trebor Scholz and others have been working tirelessly to bring this vision into being for platform workers. The idea has even been adopted by Jeremy Corbyn as part of his ‘Digital Democracy Manifesto.’

However, while platform cooperatives will undoubtedly be beneficial for the workers who are enrolled into them, they do not inherently solve the problems introduced by a low market price for work. Stopping a cooperative worker being paid a fair wage from re-outsourcing that work to other workers for much lower wages could prove hard to police.

Others might look to digital unions or looser forms of networks as ways to build a sense of solidarity between digital workers. One explicit role for a digital workers’ union could be building a class consciousness amongst workers, even those at opposite ends of the globe. Such work would need to highlight the precariousness of much of the digital work that is out there. In this effort, it’s worth turning to Gina Neff’s work on this so-called ‘venture labour’, who pinpoints that this notable absence of class consciousness is characterised by “explicit expression of entrepreneurial values by non-entrepreneurs”. This cannot be allowed to become the norm. Organising efforts should instead use those very digital forms of communication to highlight the fact that workers are receiving all of the risks of entrepreneurship, but few of the rewards.

These strategies for cooperative forms of organising do not guarantee to resolve the problems of the global digital workforce. But they present a promising starting point; an alternative vision for what digital labour should look like. As thousands of people join the internet every day, many of whom are hungrily looking for work, we need to creatively think about how best to use digital tools for collaboration amongst workers instead of competition between them. Our digital tools are new, the forms of work that they mediate are new, and many of the challenges they raise are new. But, in a world where the atomization of work continues to be used against digital workers, let’s not forget an old rallying cry that has served us well: workers of the world, unite!

(this article was originally posted at OpenDemocracy)